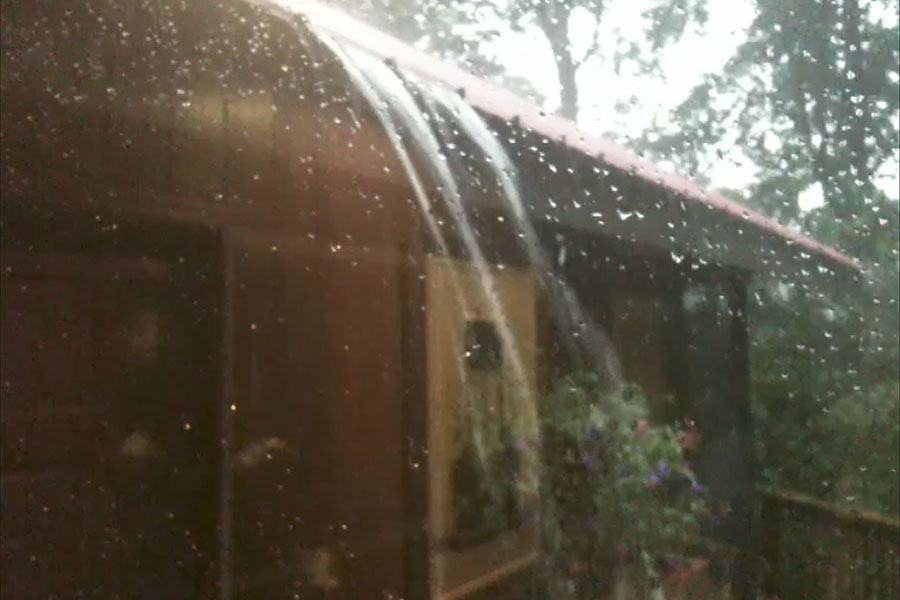 I don’t know how often I’ve come to the realization that it was time to admit that I should cut my losses and move on. I do know that the number of times I’ve had to do that is way more than I’d like, but situations change and you just gotta suck it up.

Most recently, I’ve been questioning my decision to put a red metal roof on our home some 10 or 12 years ago. It sure seemed like a good idea at the time, especially since we have dark brown rough cedar siding. Brought some nice color to the house and fit the rustic motif rather well. What I didn’t reckon on was the speed with which water comes off that shiny metal and how it doesn’t bother to slow down long enough for the gutters to catch it. Gravity clearly still works and even with a moderate rainfall, water goes everywhere. Not to mention when we get one of too many gully washers every spring, summer and fall. It’s truly a sight to behold.

Except when you realize that the damage from those cascading sheets of liquid misery has been considerable. That water, roaring off the roof and onto my deck, splattering everywhere, rotted out four window frames and sills before I even knew it, precipitating the replacement of six windows all told. Not to mention the destruction of the deck boards themselves. Significant and costly repairs.

So after one of our more recent tempests put a good-sized limb through the roof of my garage, I was at the point where I needed to figure out if it was time to cut my losses – along with several trees. Fifteen years of life left in that metal roof or not, maybe it’s time to do something different.

And so it goes with websites, yeah? Of course it does. Remember, that’s what we do here at <engine/> and while they let me have fun tellin’ my stories, they expect me to eventually get to the point.

So here we go. Consider that a lot of websites have been around for a fair number of years, maybe even written in HTML. The vast majority built over the last 15 years or so were designed using WordPress, Joomla or Drupal – all of which are driven by PHP – the software that powers well over 75% of all websites worldwide.

As sites mature, not all of the pieces and parts age as gracefully as others. Developers who created things we loved and needed when we built a site might randomly decide it’s time to take a break. So they stop updating their code to be compliant with supported versions of PHP, abandoning their plugins alongside the information superhighway. And that means these plugins and other bits we depend on might well break if we opt to upgrade our PHP as a best practice.

While this is cause for concern, we do have options. Say we upgrade the PHP and something breaks. There’s usually a fairly specific error and if we feel adventurous, maybe we edit the code for the abandoned plugin and it gets happy again. This isn’t always an option, and if I didn’t work with the talented coders here at <engine/>, I wouldn’t even undertake such an endeavor. Oh, I might fix that error, but heaven only knows what I might break in the process.

If editing the PHP for a plugin or an extension isn’t practical, you’re pretty much down to one of two options, neither of which is optimal. You can find another plugin that works with all things current, possibly creating an alternate reality for a few hours as you switch things over, or you can just ignore the issue. Sadly, but not surprisingly, a lot of people take the latter approach. And that begins what I call the cycle of “If Onlyness.” I shouldn’t have to explain that, should I? I’ll probably write on “If Onlyness” someday soon.

So we opted to take the path of least resistance, much like the water that rushes off my roof.

A few blogs ago, I wrote about the ripple effect. As I said at the end of that piece, I initially thought it was gonna be about bad things, but in spite of my mood at the time, it turned out happy. Life’s funny that way. Ah, but now we’re on the flip side of the ripple effect.

Choosing to simply do nothing is a bad idea in this case Timmy. Maybe not today, nor tomorrow, but someday soon we’re gonna wished we’d looked this problem straight in the eye, because the ripples are starting. As our current version of PHP reaches its end of life date, updates stop. Security support usually continues for another year. Then everything generally stops. And then you become vulnerable. Ne’er do wells begin to look for ways to breach your site because nobody’s watching anymore.

Maybe other plugins lose developer support and age out. The ripples are getting bigger Timmy, and it won’t be long before the barbarians are at the gate.

Then the realization hits – time has come. Do we keep muddlin’ through, patching as best we can, or do we cinch up our britches and decide we’re ready for a reboot? Given my experience, reboots don’t generally come cheap, but on balance, and over the long haul, they’re more often than not well worth a calculated and reasonable investment.

So if you’re not sure your website is keeping up with the current technologies, we’ll be glad to evaluate things for you and offer our opinion and present some options. It’s kinda what we do.

And for the record – I decided that there’s no sense fighting it, hoping that the damage from the Niagara Falls of North Carolina will miraculously cease to cascade from that metal roof. We’ll be getting new architectural shingles put on in a month or so.