Everyone Loves a Slideshow 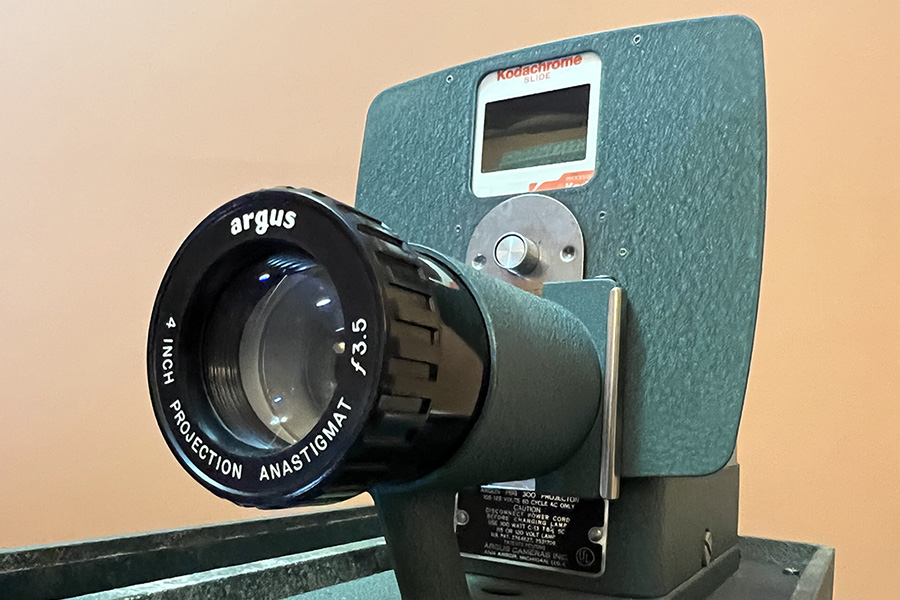 I remember when I was a kid, my folks would sometimes have family and friends over for dinner. Afterwards, every once in a while, Dad would break out the slide projector because somebody had gone somewhere and shot up a bunch of Kodachrome.

It was great fun. We got to take a trip without ever leaving the farm. And our projector didn’t have a carousel. Remember, I’m old. Nope. Just a rotating slide holder that allowed Dad to show one slide as he – or perhaps Gramp – told us all about it while Dad removed the previous slide and loaded another.

And Dad was a petroleum engineer by education, so he was very methodical and always prepared. But he didn’t always get it right. We’d get an upside downer from time to time and my brother or I would holler “Dad, it’s upside down!” as if he didn’t know.

Sometimes I think we lived for those moments. Or maybe one would be backwards. Then there’d be a blinding flash of light across the screen because there was no slide in the holder and we couldn’t see the next three slides for diddly because our pupils were the size of pin pricks. And it was only a matter of time before we heard a snore. Most likely Uncle Homer. I know I usually fell asleep about halfway through.

It’s likely those experiences, although only remotely related, have shaped my bias about whether a website should include a slideshow or not.

And website slideshows are far less manageable than that old projector Dad used. Only four basic things could go wrong with the old Argus 300 – upside down, backwards, upside down and backwards or vertical being swapped for horizontal. Wonder how many permutations that works out to be? I’ll leave that up to you to figure out Timmy. But all easily fixed.

Sadly, the tools available for creating web slideshows are fraught with much more peril. And it blows my mind as to why. Seems like it should be a fairly easy thing to manage. I mean some of the addons we see are even named things like Simple Slideshow – lulling us into a sense of false security as 20 minutes in we find them to be not so simple.

Others don’t even pretend to be simple. They’re loaded with features and probably make sense to rocket scientists and the people who developed them. But they leave me scratching my head. And most days, I’m actually smarter’n a bag of broken doorknobs.

So maybe I decide to find a tutorial and get wiser. Seems most come as videos because that’s a whole lot easier and quicker than creating a step-by-step guide. And people love to hear themselves talk. Oddly though, a lot of folks who create these videos burn that saved time by telling you their life stories. Or they talk so fast and often with accents that would seem pleasing in any other environ. After hitting ‘Pause’ and going back six or seven times, I bail in frustration, hoping the next video will be more to my liking. I soon realize that once again, I’ve become the very definition of insanity.

Sticking around for the show

Then I begin to question why anyone ever wants a slideshow in the first place. There are good arguments to made I suppose. Maybe you have more than one thing you want to feature on a page and a slideshow seems like a good idea. Yet statistics show that the first slide gets way more than its fair share of the clicks, with each subsequent slide suffering a dramatic drop off and hitting a new low. And if you’ve read my blog on ‘The Need for Speed’ you’ll know how I feel about statistics in general. But this one kinda makes sense.

Then there’s a classic Catch 22 right there. As mentioned in the above referenced blog, the average person gets distracted in a mere two seconds after hitting a page. And slideshows often increase page load times significantly. So if people aren’t gonna hang around long enough to even see your slideshow, what’s the point? Ironically, you may have alienated them while attempting to engage them. While I’m dubious about that ‘two seconds’ thing, I think it bears thought.

So let’s say that your slideshow loads like lightning and users don’t bail. Does it actually add value to your site and create that more engaging experience we all relentlessly seek? Or is it just another flash in the pan? I suppose it depends largely on what the slides offer, but by and large, I think great content and carefully selected static images often create a more engaging user experience.

And if a slideshow is set to auto play, whoa. Static content beats that set up with a stick. Users’ eyes have time to focus, letting the brain digest what the eyes just sent its way before wondering how fast it needs to engage to catch everything on the next slide. If it’s not set to auto play, I often wonder if visitors even realize there’s a slideshow there. The cues aren’t always as obvious as they should be. Dots and arrows sometimes fade into the background.

What other reasons are there for using a slideshow?

SEO? Well let’s think about that. Virtually anything, properly crafted and managed, can help with SEO. Once again, I’ll argue that you’ll be better off letting SEO friendly content do the heavy lifting. Let’s just say that slideshows and SEO are a coin toss at best.

They’re trendy and all the kids are doing it. Kidding Timmy. I needed a break. Actually, there aren’t any good numbers on this, but I’ll bet a dollar to a doughnut it’s less than 40%.

Slideshows break things down and create content that’s easy to comprehend. I think there’s more than enough evidence – anecdotal or otherwise – to indicate that a lot of us are Labradors in fields of butterflies. For that reason, I’ll give slideshows two points here.

But are slideshows effective? Oddly, there are few good references either way on this. It seems people who do this kind of testing hold their cards close their vests. Probably because the people paying them to run the tests aren’t the sharing kind. I Don’t blame them.

Number one gets all the attention

One thing is abundantly clear though – the first slide gets the most attention in every study I read. And in a lot of cases, when compared to a static image with a call-to-action button, they simply pale in comparison in terms of effectiveness. So I’m left asking myself “What’s the point?”

I dunno Timmy. I do know that a lot of folks who hire <engine/> to build websites love sliders and carousels and rotating image things, so they aren’t going away. And that we’ll keep on building them. But it’s important that everyone understands that these things are often surly, and not easily tamed.

And when it comes to responsiveness, they can get just plain beastly. For that reason, we often end up building two versions of everything that slides – one for desktop and one for mobile. And that adds to the cost. So that old cost/benefit thing rears its ugly head as well.

But for my money, the best slideshows ever were Dad’s.