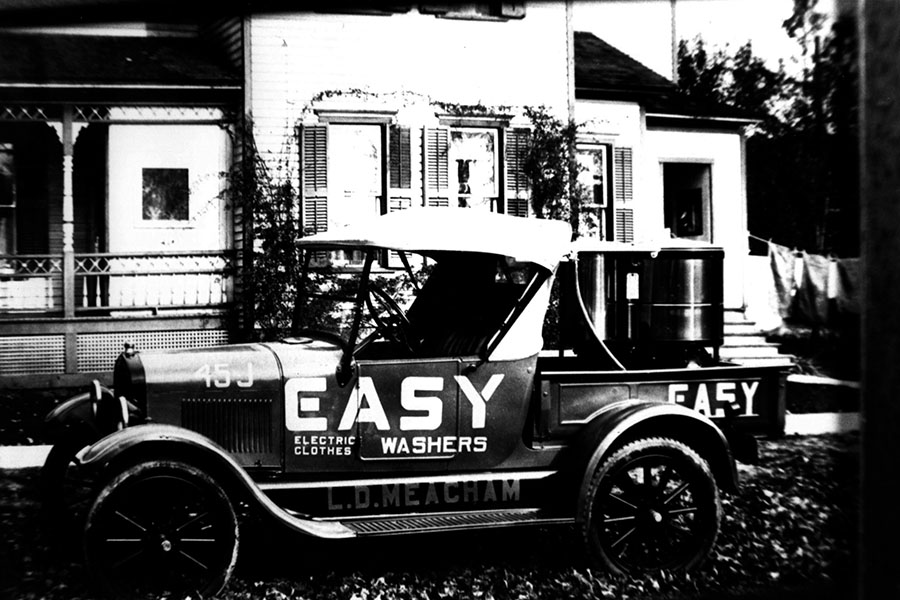 Phil was my Dad. He and my Gramp owned and operated a hardware store. We lived in a small town in northern PA where you pretty much lived or died by your reputation. That’s why they operated continuously for over 65 years and only called it quits after Dad hit 80 and decided he wanted to take a break.

Sometime way back when, Gramp decided selling appliances might be a good idea. They started small with Easy washing machines, but Meacham Hardware soon became known far and wide as THE place to go for all things Frigidaire. Over the years, selling and servicing appliances became a big part of the family business.

Whenever anyone would call and tell my Dad that their washing machine or dryer wasn’t working, he’d always ask if it was plugged in. First time I heard him say that I think my jaw dropped about a foot, figuring if I would have asked a customer such a thing it might not have gone well for me. He saw the look on my face and just smiled as he thanked the customer for calling and told them he was happy that it all worked out.

After hanging up, he told me why he asked that question. Seems sometimes folks (or likely their kids) unplug things to plug other things in. If a customer confirmed that their appliance was indeed plugged in, he’d then ask them if a fuse was blown. By asking those two simple questions, he explained, he frequently saved customers $25 for a service call – remember I’m old – and freed up our truck and serviceman for bigger things.

We use that same approach with websites today. When a client lets us know that their website is down (not broken mind you – that’s soon to be addressed) we start with a few simple steps, first checking to see if the server it’s running on is alive and well by trying to access the site from one of our computers. That’s equivalent to asking if it’s plugged in.

If we can access it, it’s at least plugged in and there’s probably something weird going on our client’s end. Perhaps, for one of a dozen reasons, their IP address may have been blocked by some over-zealous software on the server. That’s the blown fuse thing. We’ll check that and add them to a whitelist if that’s the case. Other steps follow, each a little more complex than the previous, until we figure out why the site is down.

If we’re unable to pull the site up from our end, then we’ll look at the server because by definition, servers are quite persnickety and like order. While we monitor servers and sites with several different tools, sometime things happen – like automatic updates to the content management system (CMS) that a site utilizes – and those updates can conceivably take a site down. Whatever the case, we’ll root around until we find the solution.

Agreeing on the problem

When a client tells us their website is broken, it’s often a whole ‘nother story. Broken has many different meanings so we first have to determine what ‘broken’ really means in context. We’ll look at the site and see if we can determine what’s broken. And it may well look fine to us. In that case, we need to gain a little clarity and we’ll ask annoying questions about browsers, resolutions and the like. Or it may be obvious, with pictures and text blocks in places where they clearly don’t belong, trying to swallow each other up, or moving half off the page, or some other such silliness. In either case, we’ll eventually see what our client sees and dive in to fix the issue.

For the record, it’s really helpful if clients can tell us when they first noticed something was amiss, especially if they added content, or updated any plugins or themes in the CMS just before something broke. Surprisingly, just adding content can blow a page up, especially if it’s pasted in from another site with the HTML tags included. Seems some content management systems don’t display pasted content correctly when it includes tags not generally in use in the document flow and they can throw everything following off. And while updating themes, plugins and core files is indeed a best practice, there’s a reason the developers of such things implore you to make a full-site backup before updating anything.

Once we see the brokenness, with or without a starting point, we begin the process of figuring it all out. We’ll take a look at things behind the curtains and see where the culprit might lie, likely looking for rogue plugins, things that need to be updated because we updated something else or there’s just some improperly formatted content. Forgetting to add an end tag like “</div>” can break things rather spectacularly. It’s a process where we eliminate variables until we find the problem. Since we’ve been collectively working as web developers for more years than we care to admit, we’re gonna figure it out.

And given that we started with Phil’s First Rule of Appliance Repair, we’ll often get to the root of the problem a lot quicker. Thanks for that Dad.