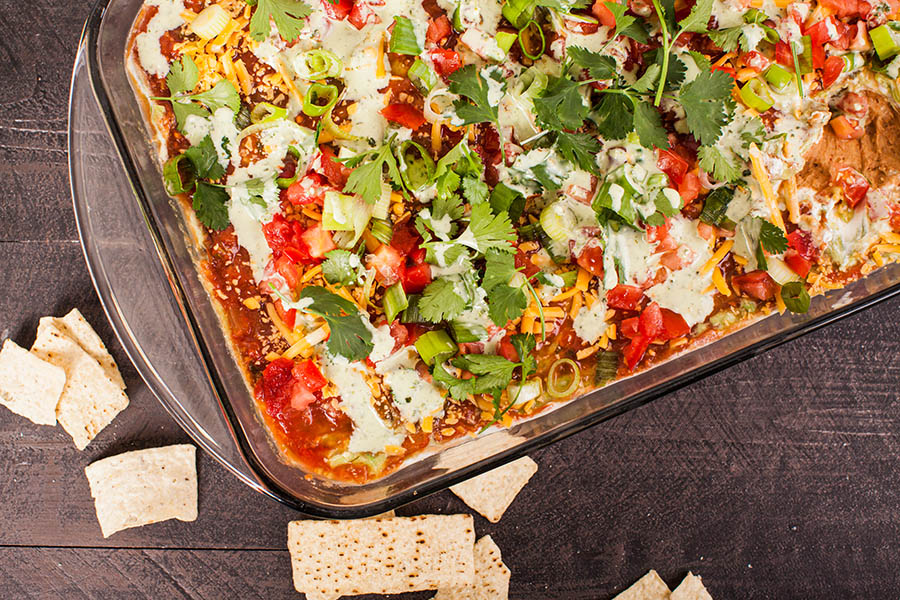 Wow. It’s been a really long time since I indulged in that wonderful 7-layer dip I used to make so long ago. It was lots of fun to put it all together until my OCD flared up and I established very specific rules about how everything had to be assembled. Them beans hadn’t better be pokin’ their heads up through that sour cream or there was gonna be hell to pay. And careful with that cheese. It wasn’t easy being me back in the day.

But strict construction guidelines aside, boy howdy was it ever tasty. Not sure where it fell on that food pyramid thing, but I’m relatively certain it was about as far south from healthy as food could get. Except maybe for bacon. Or fried butter.

Okay. Back to the point. 7-layer dip can be good, especially in small doses. 7-layer emails can make you crazy. Maybe I should explain. 7-layer emails start innocently enough. A simple email that someone sends with perhaps instructions regarding the placement of several items on a web page, or changes to copy here and there. Maybe two other people get copied on that email. Before the primary recipient can make the changes the sender requested, one of the people who was copied on it decides to add a couple more things to the task list. And then they hit the “Reply All” button.

When the original recipient finally looks at that email, it’s not too big a deal because there are only 5 or 6 changes staring them in the face. They make the changes and so note and reply to everyone because it’s now a party. The original sender checks things out and sees that their changes have been made properly. The other person who added a couple more things forgot they weighed in and completely bypasses the reply.

In a day or so, the originator of the email decides to add a half dozen more items that need fixin’ so they add those things to the original email and hit that “Reply All” button again. This time, that other person who originally added a couple more things sees the email and they find that the changes they wanted need some more changing so they make their notes and hit that “Reply All” button once more.

Way too many chefs

At this point, the original recipient is beginning to experience a little confusion, unsure what changes they’ve made and when, so they start backtracking to check. And we’re only about three layers deep into this email. Dollars to doughnuts it’s gonna get uglier.

Once everything has been checked and all the edits in the known universe have been made, the changer of things hits that “Reply All” button again and waits. Several weeks pass. Then one of the people involved decides to request similar changes to another website. But instead of firing off a fresh email, they just decide to “Reply All” to the original because all the parties are the same. And maybe this time they attach a Word document, a jpeg and a PDF to make things easier. Layers on layers. The poor soul entrusted with making the changes begins to wonder about their life choices and the career path they’ve chosen.

I could go on, but you get the idea. Likely some of you think this is no big deal. It’s only ONE email and there aren’t but FIVE layers. Then I’d ask you to consider that during the course of a day, more than a few 7-layer emails come across our desks. Still, not a daunting task, but it takes time to sort it all out. Time that could be better spent perhaps. And compounding the confusion is the fact that the instructions contained in some of these emails, while clear to the sender, can be a bit cryptic in the eyes of the recipient.

So how do we fix the 7-layer email? I’m gonna start by suggesting something I’d never thought I’d suggest – using a program like Basecamp to manage your projects. I’ve resisted using programs like this for the better part of my adult life. I thought they were unnecessarily complex and often counter-intuitive. Not so much anymore, especially after my experience with too many 7-layer emails. And if I can learn to use a program like Basecamp, trust me when I tell you that virtually anyone can.

If that doesn’t seem like a viable alternative, maybe we should think about the way we use email. First and foremost, a good subject line gets us off on the right foot. Something a tad more descriptive than “Changes” or “It’s all gone wonky.” Such a simple thing, so often forgotten.

Beyond that, let’s try to avoid letting a single email grow uncontrollably. An easy way to keep things in check is by steering clear of the piecemeal approach. I know it’s not always possible nor practical, but whenever feasible, try to include a comprehensive punch list from the gitgo. That makes life so much easier for everyone involved. And it’s always a good idea to start a new email for each project. Piggybacking projects gets really confusing, especially if there’s a couple of weeks between them.

That’s my thought for the day. I’m hungry now so I think it might be time to try making that 7-layer dip again. Minus the OCD…