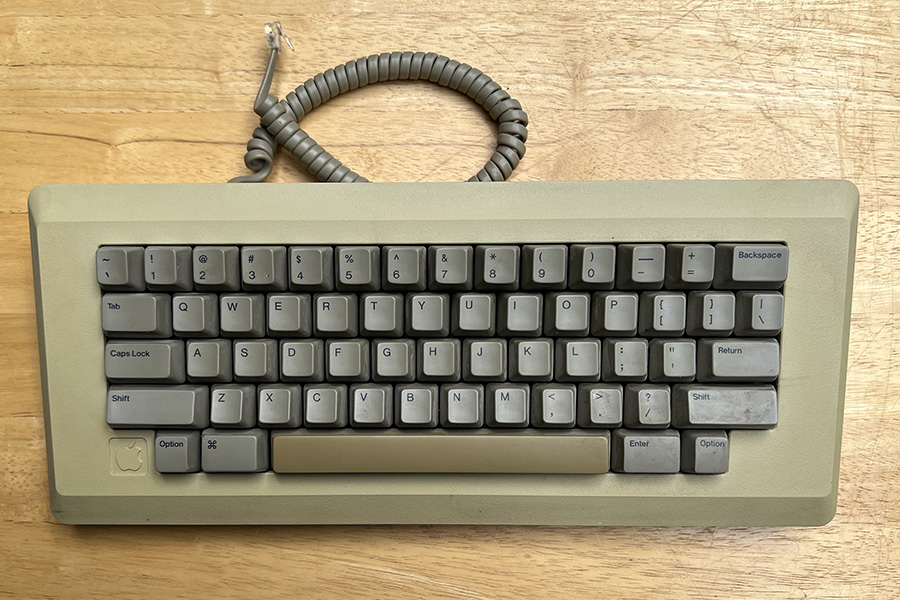 I don’t know exactly how long ago tech support became a serious thing. I know when I first started fiddlin’ with computers, Ceedy Morgan was my tech support department. He convinced me to buy my first Mac when I lived in Oklahoma City, and so, by default, whenever I had an issue I’d call him.

And I’ll never forget one night after I moved to NC. I was charged with drawing detailed maps of Winston Salem and surrounds. Since the average person couldn’t afford scanners in 1989, I taped a transparency that I made from a copier onto the 9” screen of my Mac Plus, painstakingly drawing every road, boundary and outline for the whole of the county using Illustrator 88. That was agonizing, and likely contributed to the early onset of my cataracts.

So one night, I was adding some text to one of these maps and suddenly the ‘+’ sign started unceasingly repeating itself across the screen again and again and again. And it had been a fair while since I’d saved the document, so I didn’t want to just pull the plug. In utter panic, I called Ceedy. He asked me several questions to which there were no good answers.

Then he suggested I look down. Seems a book had made its way onto the top corner of my keyboard, just barely touching the plus sign key. No ‘F’ keys back then. Once that book got gone, all I had to do was get rid of what must have been nearly 10,000 unwanted ‘+’ signs and life was good. Lesson learned Timmy. (See also: Phil’s First Rule of Appliance Repair).

From that day forward, I became a lot more learned, to the point of providing tech support for a couple dozen Mac-based advertising agencies and graphic designers in the Triad. And whenever someone felt stupid about doing something, I’d tell them my ‘+’ story, hoping they’d laugh and still pay me for support. And when someone needed me, I was there.

I eventually got too busy with coding, design and developing computer-based training programs to keep up with the tech support. That’s kinda when I started relying on others for support with programs and technical glitches I’d encounter.

Some of you will remember how it was 15-20 years ago. You’d pick up the phone, and in short order, be talking to a human being. Usually, the person was very patient and not at all snarky. Within a few minutes, you’d have your answer.

Then slowly, at first, things began to change. And not it a good way Timmy. I remember the first time I called someone, seeking support for a $900 program I’d just purchased, and they asked me for a credit card. What? Why is that, I queried? They told me that there was a minimum fee of $29.95 for tech support. I was taken aback, to say the least. I explained that I’d just bought the program from them, and it wouldn’t even install from the 32 floppy disk they included. When they reiterated the need for a credit card, there were several exchanges, each more heated, until I eventually told them where to get off, hanging up the phone with a fair amount of certainty.

Granted, this isn’t exactly ancient history, but it was well before answers abounded on the internet. So I’d phone a friend, who might phone a friend, and we’d eventually figure it out.

Figure it out yourself

That was a bellwether moment, clearly marking the beginning of the end of tech support for me. I’m convinced we’ve been in a downward spiral ever since. Not that there aren’t shining examples of outstanding tech support out there, but they are way too few and far between.

And the Catch 22 being that the more we need support – with everything being more complex and confounding – the less of it there is.

Oh sure, we can do a search and find 17 ‘close but not matching’ issues. And when we look at the dates, yeah, 2011 probably isn’t relevant to the current release for anybody’s stuff. If it is, we should probably question why we’re still using it.

Or perhaps we can visit their website and talk with a chatbot Timmy. That’s always a treat that spikes my systolic blood pressure well north of 180. I don’t know how many times I’ve been pre-screened by those dumb things, all trying to direct me to less-than-relevant topics, but I’m quick to lose patience, rapidly typing ‘HUMAN HUMAN HUMAN’ – thus entering a hell loop with a bot that just doesn’t care.

And then when we do get a human, they’re generally not much help. They patiently read about my issue as they type answers to six other people who are as frustrated as I am – likely as they drink beer and think how lucky they are that someone is paying them to basically serve no greater purpose.

No one has all the answers, but we try

My favorite response is when they suggest I visit their forum and seek answers from whatever oracle lives on high there. When I explain that I already did that three days ago, they got nothin’ – other than to blame the lack of response on the pandemic. When is that no longer gonna be an acceptable answer to anyone but me? It’ll soon be 2023 Timmy. Lead the charge!

Sometimes answers do emerge from forums. But not from the Oracle. Likely from another long-suffering soul who gutted it out and came up with some sort of hacky workaround that we’re all forced to gleefully accept because life’s too short to do elsewise.

All that said – here at <engine/>, we try as best we can to educate ourselves and shield you from the demons who inhabit the nether regions of our software world. We do our level best to fix any problems we might jointly or separately encounter with your site, but answers aren’t always easy to come by, as painfully detailed above. But we’ll keep working on it. We all need to just stay calm.

Now, I think I’ll call Ceedy and see if he knows why Photoshop quit recognizing the size of the image I just copied to my clipboard and started coming with the dimensions of the previous item that lived there every time I try to create a new document…